Shifting gears.  As a concept it seems easy, but for many new cyclists it can be a little confusing.  Don't worry, we're going to get you up to speed (heh!)  This may seem like a lot of information, but you don't have to remember it and there won't be a test.  It's purely explanatory.  The actual methods and instructive aspect are just a few sentences.

That's a Lot Of Gears

Yes, that stack of cogs on your rear wheel looks like a lot, but think of how it was when there were half that amount but two and sometimes three chainrings up front to create the ratios!  These days with 1X drivetrains (expressed as "one-by" which means one chainring) and these massively ranged cassettes, shifting has become much easier to manage.  Road bikes still have two rings up front and we'll get to that, but rest assured things are much easier with just one chainring to contend with on most mountain and gravel bikes.

The purpose of gears is simple: to let you ride up hills easier.  Further, they also allow you to pedal very speedily downhill if you so desire.  The reason for the wide range of gears available on your bike is to allow you to successfully tackle any hill you encounter.  In actuality, you may not ever use every gear, but having them is imminently useful and will allow you to be most efficient once you've mastered shifting.

Also, all these gears will allow you to ride further with less energy expenditure.  If you hike or jog, you've likely noticed that after you're warmed up you tend to fall into a comfortably maintained rhythm or range.  It's no different on the bike.   You set your pace with pedaling a comfortable gear and adjust it depending on the steepness and length of the hill.  Having so many gears let's you fine tune this and maintain an even and efficient pace.  This in turn keeps your heart rate steady and you don't get exhausted with increased effort.

Mountain bikes and other bikes with a flat handlebar will have trigger shifters that are actuated with your thumb and/or forefinger.  Which one does what is dependent on manufacturer.

Road bike shifters are built into the same lever as your brakes and work by touching the tabs or swinging the lever body.  There's an informative video below to illustrate this.

Electronic shifting such as Shimano's Di2 and SRAM's Red and AXS systems operate with small buttons that actuate servos to do the work as opposed to you mechanically moving a cable.

There are just two. Like many laws of of physics, they are irrefutable.  Learn them, know them, live them:

Cogs and chainrings are measured in teeth.

On bikes with one chainring, if the chain is riding on the biggest diameter cog --  the 50T -- there will be very little noticeable resistance on the pedals.  In such an easy gear you can climb a utility pole if you can maintain traction.  Put your bike in this gear and pedal around on flat ground.  It takes very little effort to pedal, right?

OK, now keep pedaling and start clicking the chain down through the gear range and notice that it gets harder, more resistance develops, and your speed increases.

Spin it up!  Pedaling at a brisk pace increases your stamina on longer rides and enables quicker acceleration.  You may hear some riders claiming they like to mash a harder gear to get a leg workout.  This isn't weightlifting.  Spinning higher rpms in an easier gear is going to get you plenty workout, both strength and cardio.  It also makes shifting smoother as you're not pushing on the pedals so hard.

As a rule, try not to cross-chain on bikes with two front chainrings.  Cross-chaining occurs when you have the chain on the big front ring and the big rear cog.  Riding like this is asking a lot of the chain because it is not traveling in a straight line.  Look at the chain line in the photo below to see an example. Notice how the chain heads off to the right instead of tracking in a straight line?  Don't do that.

It can help to think of it in halves: use the little ring up front with the top half of the cassette and use the big ring with the bottom half. 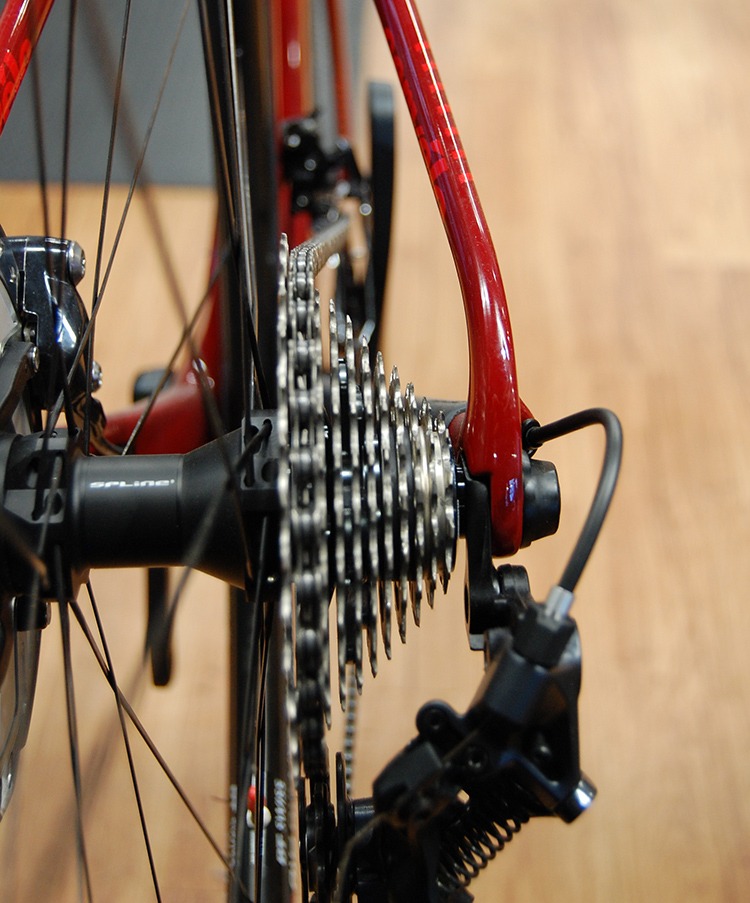